Home Featured Guendouzi left out in the Cold by Arteta
FeaturedFeaturedNews

It is not looking any better for Arsenal midfielder Matteo Guendouzi as he continues to be frozen from matchday squads by Head Coach Mikel Arteta. The 21-year-old combative midfielder has been left out of the squad for three consecutive games. His last game for Arsenal was in the defeat against Brighton where pictures showed the midfielder grabbing Brighton striker Neal Maupay around the neck when the game had ended. It was also reported that Matteo made comments about pay gap between himself and the Brighton players during the game.

While it is unclear which of the incidents would have particularly irked Mikel Arteta or if there is, in fact, a possible separate incident that might have occurred internally during a discussion with the player, the Head Coach seems to have distanced himself from the player.  His comments post the win against Norwich  tend to highlight this growing divide

‘It is the same reasons as last week. Some things have to change and nothing has changed.’

Earlier in the week, there were reports from France stating during an internal meeting regarding that episode, Guendouzi made it known that he would be happy to depart this summer. 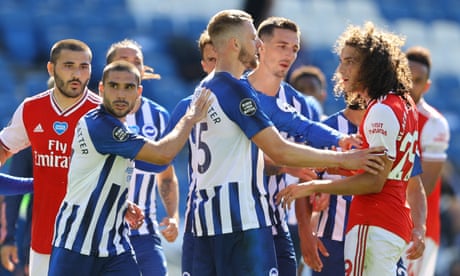 Reacting to the report, Arteta stated, “Whatever internal issues we have, we will deal with them privately and I am never going to make any of that public”

On whether he felt the midfielder would be an Arsenal player next summer he stated.

“All the players that are here, I am counting on them,” he said. “If they want to jump on the boat they are more than welcome and that’s always my mindset. I am here to help all of them to improve individually and collectively. That is my job.”

Arteta has now disciplined Guendouzi on two separate occasions since replacing Unai Emery in December. It was reported that the Arsenal coaching staff were irked by the player’s attitude and body language during the team’s warm-weather training camp in Dubai.

With rumours spiralling about Arsenal’s interest in Thomas Partey who occupies a position similar to Guendouzi, Arsenal might be looking to let the player leave this summer if it would help bring Thomas into the club.

The Athletic understands Arsenal have intensified their interest in signing Atletico Madrid midfielder Thomas Partey. The 27-year-old Ghana international has a €50 million release clause but Arsenal will be hopeful of negotiating a lower figure. Arsenal have a long-standing interest in Partey, who is thought to be keen on moving to the Emirates Stadium. He played the full match in his side’s 2-2 at Barcelona on Tuesday.

Engage us on Twitter @canoncrested or in the comments section below

All The Stats as Arsenal put four goals past Norwich

We cannot sell our best players – Arteta on Aubameyang

@Arsenal : My Love is yours. #Valentines

Arsene Wenger: Judge me in May.